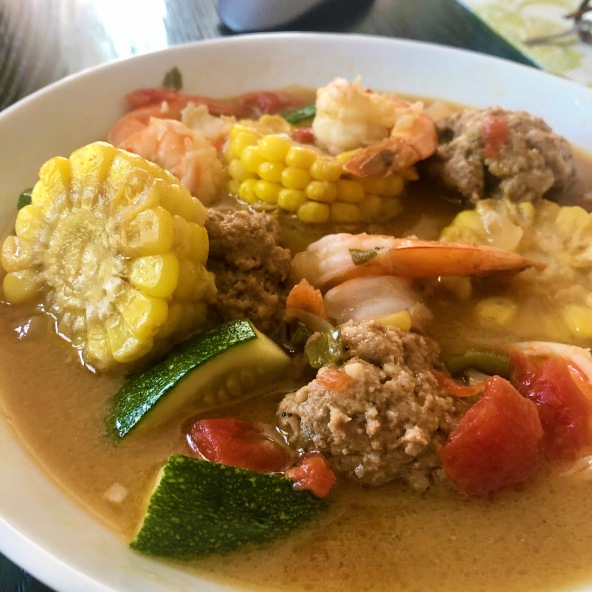 This was inspired by by sister from another mister’s mother… yes, you heard me right. My best friend’s mother, Josie, used to have a pot of soup or beans or something on the stove all the time… which was made living next door quite delightful! I recently discovered a genuine Mexican market up the street from me (which I’ve missed since moving to Nashville from Los Angeles) and I went a little crazy shopping. Seriously – support local vendors any time you can. I mean, FIVE limes for $1.00 and they’re .85 each at Kroger! With the exception of the seasonings (which I already had) I got every ingredient listed below at my new favorite market. Happy Cinco de Mayo!

Preparation
Meatballs:
Mix all of the meatball ingredients into a large bowl. Be careful not to over mix the meat. Just gently, with your clean hands (best tool in the kitchen!), fold the mixture over until it’s full incorporated. Using a small ice cream scoop, create 1.5″ balls… roll firmly in the palms of your hands and set aside. These can be done up to 24 hours in advance – just refrigerate.

Soup:
In a large soup pot saute the onion, poblano, and garlic in olive oil until softened (add garlic last so it doesn’t burn). Add the wine and seasonings (cumin, paprika, cinnamon. salt & pepper) and continue until some of alcohol is cooked off. Then add the chicken stock, canned tomatoes, potatoes and corn. Bring to a rolling boil then reduce to simmer for about 20 minutes. Once simmering add the meatballs and cook right in the soup. They’ll take about 5-8 minutes depending on how large the meatballs.  Add the shrimp and zucchini about 5-8 minutes before you’re ready to serve.  Continue simmer until shrimp have turned pink and zucchini is tender. Taste and add seasonings if needed. Garnish with cilantro before serving. 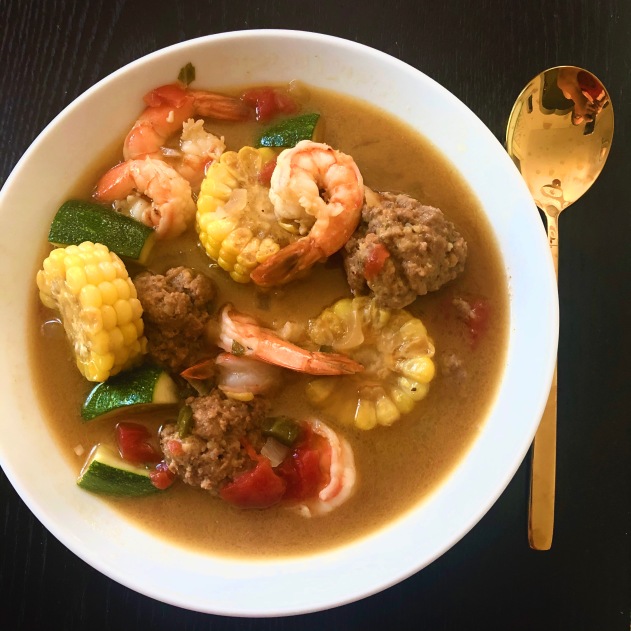